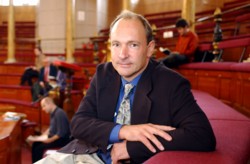 
In 1989, Tim Berners-Lee invented the World Wide Web, an Internet-based hypermedia initiative for global information sharing while at CERN, the European Particle Physics Laboratory. He wrote the first web client and server in 1990. His specifications of URIs, HTTP and HTML were refined as web technology spread.
He is Director of the World Wide Web Consortium (W3C), a Web standards organization founded in 1994 that develops interoperable technologies (specifications, guidelines, software, and tools) to lead the Web to its full potential. He is a founding Director of the Web Science Trust (WST) launched in 2009 to promote research and education in Web Science, the multidisciplinary study of humanity connected by technology. Berners-Lee is also a Director of the World Wide Web Foundation, launched in 2009 to coordinate efforts to further the potential of the Web to benefit humanity.
At MIT, Berners-Lee is the 3Com Founders Professor of Engineering in the School of Engineering, with a joint appointment in the Department of Electrical Engineering and Computer Science at the Laboratory for Computer Science and Artificial Intelligence (CSAIL). He is also a Professor in the Electronics and Computer Science Department at the University of Southampton, UK.
In 2001 Berners-Lee became a Fellow of the Royal Society. He has been the recipient of several international awards. In 2004 he was knighted by H.M. Queen Elizabeth, and in 2007 he was awarded the Order of Merit. 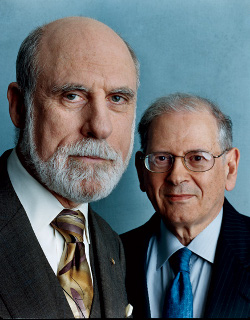 While it’s true that both Vinton Cerf and Bob Kahn made of their many of their own notable accomplishments, it was their partnership that drove the creation of the TCP/IP protocol as one of the core components of the Internet.

The partnership can be traced back to when Cerf was a graduate student at UCLA and Kahn, who was working on hardware for the ARPANET. But it wasn’t until 1973 that when Kahn, who as then working for Defense Advanced Research Projects Agency (DARPA), rejoined his UCLA colleague to create the TCP/IP protocol.

There were two major events that led Kahn to start developing the TCP/IP protocol.
During the International Computer Communication Conference in the fall of 1972 when he was working at the Information Processing Techniques Office (IPTO) within ARPA, Kahn demonstrated the ARPANET by connecting 20 different computers. This was described as “the watershed event that made people suddenly realize that packet switching was a real technology.”
But it was in 1973 when Kahn was working on a satellite network project that he got the inspiration to develop what eventually became the TCP protocol. Initially, the TCP protocol was meant to be a replacement for the ARPANET’s NCP protocol. All of his work on TCP/IP helped laid the groundwork for open-architecture networking, a concept that enables any computer and network to freely speak with one another despite the hardware or software they use on their particular system.
In 1976, Cerf joined Kahn at DARPA (the Defense Advanced Research Projects Agency) and stayed there until 1982. Then, like fellow Internet pioneer Larry Roberts, he realized that packet switching and the Internet had commercial applicability, so he joined MCI, now Verizon Business (NYSE: VZ), where he developed the MCI Mail service that was connected to the Internet.
Along with driving the commercialization of e-mail, Cerf was a key figure in forming and funding the Internet Corporation for Assigned Names and Numbers (ICANN), an organization that manages IPv4 and IPv6 address spaces and assigns address blocks to regional Internet registries such as the American Registry for Internet Numbers (ARIN).
In the early 1990s, the two men synched up again to form the Internet Society (ISOC), an organization that aims to drive awareness around Internet-related standards, education and policy.
Their influence continues to resonate in 2011 through their activism and corporate work.
Since 2005, Cerf has served as Google’s (Nasdaq: GOOG) vice president and chief Internet evangelist and on the UN’s Broadband Commission for Digital Development, which has set a goal of expanding the availability of broadband services. Meanwhile Kahn serves as the Chairman, CEO and President of the Corporation for National Research Initiatives (CNRI) that is set on providing funding for research and development for the National Information Infrastructure.


Larry Page and Sergey Brin founded Google, the Internet search engine, while they were graduate students at Stanford University in Palo Alto, California. Since its founding in 1998, Google has become one of the most successful dot-com businesses in history. Both Page and Brin were reluctant entrepreneurs who were committed to developing their company on their own terms, not those dictated by the prevailing business culture.

Page grew up in the East Lansing, Michigan, area, where his father, Carl Victor Page, was a professor of computer science at Michigan State University. The senior Page was also an early pioneer in the field of artificial intelligence, and reportedly gave his young son his first computer when Larry was just six years old. Several years later Page entered the University of Michigan, where he earned an undergraduate degree in engineering with a concentration in computer engineering. 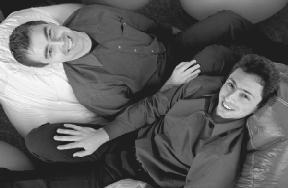 His first jobs were at Advanced Management Systems in Washington, D.C., and then at a company called CogniTek in Evanston, Illinois.

An innovative thinker with a sense of humor as well, Page once built a working ink-jet printer out of Lego blocks. He was eager to advance in his career, and decided to study for a Ph.D degree. He was admitted to the prestigious doctoral program in computer science at Stanford University. On an introductory weekend at the Palo Alto campus that had been arranged for new students, he met Sergey Brin. A native of Moscow, Russia, Brin was also the son of a professor, and came to the United States with his family when he was six. His father taught math at the University of Maryland, and it was from that school’s College Park campus that Brin earned an undergraduate degree in computer science and math.
Brin was already enrolled in Stanford’s PhD program when Page arrived in 1995. As Brin explained to Robert McGarvey of Technology Review, “I was working on data mining, the idea of taking large amounts of data, analyzing it for patterns and trying to extract relationships that are useful.” One weekend Brin was assigned to a team that showed the new doctoral students around campus, and Page was in his group. Industry lore claims they argued the whole time, but soon found themselves working together on a research project. That 1996 paper, “Anatomy of a Large-Scale Hypertextual Web Search Engine,” became the basis for the Google search engine.

How to hack WhatsAPP