WhatsApp is now rolling out the much awaited internet calling feature to a wider set of people.

After testing the feature with select users, it appears mobile messaging service WhatsApp is now rolling out the much awaited internet calling functionality to a wider set of people.

Earlier on Friday, a number of users of WhatsApp’s Android app were able to get the voice calling feature activated by simply receiving a call from a user who had the service turned on. This meant that initial testers were able to extend it to their friends who further helped other WhatsApp users join the club. However, this invite system is not working for all users.

We were able to get the voice calling feature activated on our Android phone after receiving a WhatsApp call. Although, we were able to make voice calls to other Android and BlackBerry 10 users with the latest version of the app, the feature was not being activated for all users. It’s possible that WhatsApp may have set a limit to the number of users one could invite or is only allowing a limited set of users at this time to test its networks.

The feature is not available yet on the iPhone although WhatsApp’s recent iOS update had introduced a calling button within the chat window. The feature also doesn’t work on Windows Phone hadsets, at the moment.

After activation of the feature, WhatsApp’s user interface changes to feature separate screens for dialing a voice call to WhatsApp contacts, call logs and ongoing calls. The chat window also displays a calling button (represented by a phone icon). The active call screen sports buttons for turning on the loudspeaker, switching to the chat window and for muting the call. 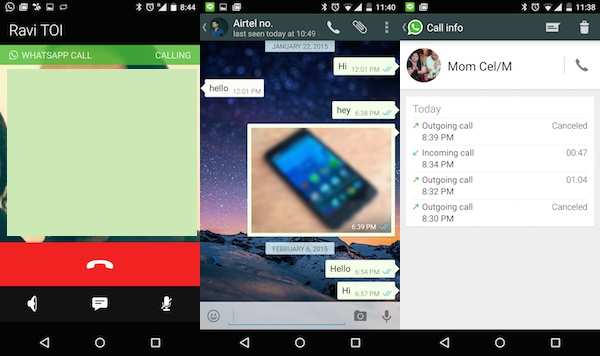 It’s worth pointing out that WhatsApp has not officially announced the rollout of the feature yet.

The voice calling feature will bring WhatsApp in direct clash with apps like WeChat, Viber and Line that already allow users to make calls and send messages. WhatsApp is the biggest instant messaging app in the world, with 700 million active users in January 2015.